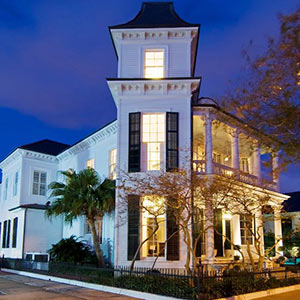 Melrose Mansion is a sturdy and elegant Second Empire Victorian mansion which was designed by esteemed New Orleans architect James A. Freret.  The building was completed in 1885. Originally designed as a single-family home, the mansion first housed the family of a prosperous commissions merchant by the name of George Lanaux.  It is believed that the Lanaux family inhabited the house for several years until it was sold in the early 1900s to another family.  The details of the second family to own the house are unclear.

When the USA entered World War 1 in 1917, laws were passed banning prostitution within ten miles of any military base in America.  The resulting fall of New Orleans’ red light district and legally-defined ‘Storyville’ left many homeless. In order to continue working, they would have had to do so in secret.  At this time, many houses along Esplanade Avenue and into the Marigny, including the mansion, began to operate as low-key bordellos. It is presumed that this era spanned from roughly 1917-1920 through to the early 1960s, and it is unclear who owned the house during this time period.

At this time, burlesque performer Chris Owens and her husband Sol Owens, who had been running nightclubs since the late 1950s, purchased the mansion and rented its several sectioned apartments to their dancers, the “Boom Boom girls”.  After several years of success with their clubs, they sold the mansion in 1977 to purchase the building which houses the establishment on the corner of St. Louis and Bourbon.

From 1977 on through the 1980s, split into several individually-addressed units, the house was rented as apartments to local New Orleanians. It is said that, during the late 1970s and 1980s, upkeep was neglected and the house was regarded by neighbors as “a dump”.
The current production has been reclaiming the house’s integrity and notoriety among visitors and locals alike since the most recent renovations were brought to wraps in the final quarter of 2011.  These renovations were completed based on the vision of previous owner Sidney Torres IV, whose father, Sidney Torres III, purchased the house in 1991, introducing it to the public for the first time as a luxurious, award-winning Victorian-themed hotel.

In the first quarter of 2013, Sidney Torres IV sold the property along with its two sister hotels, Hotel Royal and Hotel Saint Helene, to Joe Jager, local entrepeneur and owner of a large, local hotel conglomerate now known as the J Collection.